This is the true story of a little piece of 100 year old Cornish history set in The Great War and involving soldiers of the Duke of Cornwall’s Light Infantry.

It was midday on the 23rd March 1918, at The Somme.  The 1st/5th Battalion D.C.L.I. were given orders to immediately attack and take the village of Verlaines.  Tired and exhausted, and without any reconnaissance, they moved out from the cover of a railway cutting into open land just 4000 yards from the village outskirts.  As they lined up readying themselves for the order to advance, the band of the 7th Battalion D.C.L.I. who had been holding the line there for some time, stepped up and played them ‘Trelawny’ in support of their comrades.  This touching event in considered by many to have possibly been the last occasion that a British military force has been played into battle. 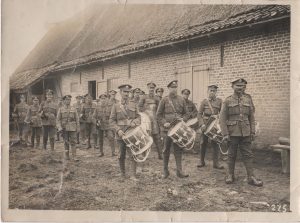 Due to the chaotic situation with the majority of the British forces in retreat, very few war diaries provide an account of what exactly happened but the following extract from Captain Leverton’s diary paints a vivid picture……..

We are then told by an acting brigadier that we are to do a counter-attack on a village called Verlaines.  It was all arranged in five minutes.  All new and supernumerary officers drop out and some of the men who are not fit….  The direction of the village we are to attack is almost behind us, so it is obvious that we are almost surrounded.  Off we go in artillery formation.  The mist has cleared and it is quite hot – a good day for tennis.  The left flank rests on the Voyennes-Ham road.  I am on the right flank.  Suddenly I hear a band and on the road is the band of the 7th D.C.L.I. trying to cheer us up. We go on for quite 2 miles.  We then see the village, extend, fix bayonets and trudge slowly on, very hot, tired and hungry.  Several men faint.  As we enter the village we run about a bit and go through swinging half-left towards the outskirts of Ham.  Most of the Bosche in the village bolt.  As we pass through the village I see half a loaf of stale bread and a bottle of lukewarm white wine on the ground which I picked up as we rush on.  We are now nearing the crest, so we go on in short rushes.  When we halt I pass the bread along to the men and eat some myself as it seems one’s only chance of ever getting any food inside you.  Next rush urged on by Tyacke (Captain C.N.W.) and we are on the crest with the houses of St. Sulfice (Ham) and a small wood looking down on us.

We now get it in the neck from machine-gun and rifle fire, especially  snipers in the houses.  Tyacke is shot through the heart.  Jeffery (Captain W.) badly wounded in the head.  It is impossible to move, and to attack a town like Ham with a few men is absurd.  We are beyond our proper objective.  The men are knocked out as they lie and the stretcher-bearers, who were splendid, were all killed.  We get our Lewis gun on to about twelve Bosche who run from the houses, and scupper them.  I get a rifle and killed one to my intense satisfaction, but the Bosche bullets fairly fly.  Morcom (Lieut. P.J.H.) and I are now left on the right flank with some of our men and a few oddments of the Division.  I am in charge of A Company.  I get the men to fire at certain windows of the houses, but it is at an unseen enemy.  I get up and see about the flanks and then go to find Edyvean (the C.O.), but it is murder to walk about.  I could feel the snipers having their go at me as soon as I stood up, but am, as usual, lucky.  The left flank, which is more or less in dead ground , go back and  dig in about 50 yards to the rear.

The whole line was then ordered to fall back behind the crest and dig in, the movement being carried out successfully.  Suddenly a Bosche aeroplane flies along our line (we are not dug in yet) at not more than 100 feet high and fires at us: several are hit.  We retaliate and bring him crashing down in the woods by Ham.  Loud cheers from everyone.  It is now 4.30pm.  We entered the village of Verlaines about 2.30pm.  That evening the fire dies down and the Bosche shell the houses they had occupied in fornt of us heavily, also dropping a barrage behind us.  They must think we have taken the outskirts of Ham.

The 1st/5th Battalion D.C.L.I. were a Pioneer Battalion.  Made up of quarrymen and miners, they were used as engineers to build defences and lay barbed wire.  They were also trained as infantrymen but that was not their main task.  It is possibly for this reason that this successful counter-attack, (one of only a few), was mentioned specifically by Sir Douglas Haig in his despatches.

When the Battalion musicians weren’t playing, their role was as stretcher-bearers. The band of the 1st/5th Battalion had a reputation as a quality band entertaining the troops when resting behind the lines. Sadly, these were the same stretcher-bearers that were killed at Verlaines.  During our research into this story, we met Melanie James, who has written a dissertation on Cornwall’s contribution in The Great War.   Her Great Uncle, George Conium was one of the stretcher-bearers who lost his life by sniper fire on the hill above Verlaines and is commemorated at the war cemetery at Pouzieres where Melanie paid her respects on the 23rd March 2018. 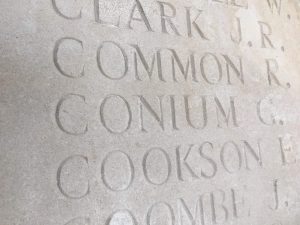 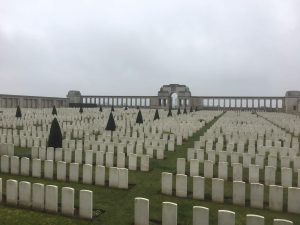